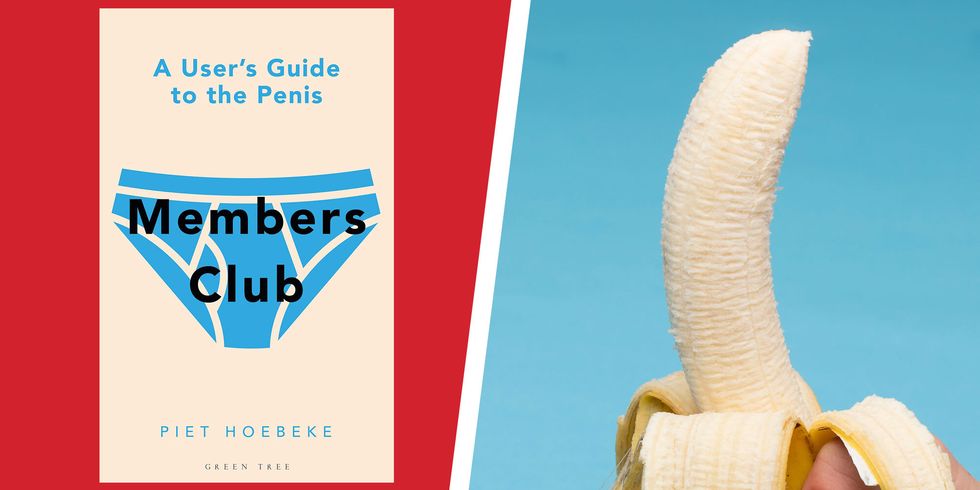 And more eye-opening insights from a leading urologist’s new book.

The following is an excerpt from Members Club: A User’s Guide to the Penis, a new book by urologist Piet Hoebeke, M.D., Ph.D.

Funnily enough, the average penis in humans is far longer than strictly necessary. Gorillas and chimpanzees do it with a lot less and they still manage to fertilize their females. When erect, a grown gorilla has a penis length of four centimeters, and a chimpanzee erection measures eight centimeters. With an average length of over 13 centimeters, humans outshine their close relatives.

What do we have to thank for the over-proportional size? Usually, natural selection does away with characteristics that don’t serve a function–for example, the body hair that humans for the most part have lost. Things that aren’t needed are done away with, because making excess tissue wastes energy.

So why does man have such a long penis?

In the animal kingdom, we see an endless range of tactics for attracting potential partners. The huge chest muscles of male gorillas are another example. The male gorilla has an imposing presence, even though he only has a small penis. Homo sapiens generally flaunt a smaller muscular structure, but they have the largest penis of all primates, in terms of both proportion to body height and absolute length. This points to sexual selection.

Exactly how this came about in evolution, we don’t know. There were no scientists around at the time observing primitive humans. We suspect the civilization process played a role in it. For a long time, man was a predator; a hunter-gatherer searching for food in the wild. Physical fitness was necessary to survive. At a certain time–or, even, over a period of time–humans became farmers. We took nature into our own hands and brute strength slowly lost importance. With farming, it wasn’t about who could run fastest or jump furthest; it was who could produce the most from his land. The physical characteristics needed to impress females became less prominent. Perhaps that is why, as compensation, the penis grew bigger.

Coitus was a brief affair in primitive humans. There was no foreplay: humans lived in a threatening environment and men were well aware that others could be close by on the look-out for a woman who was ready for sex. The faster they could deposit their sperm, the better. And how did women know that a man was ready for sex? Attraction is a game of smell, pheromones, blushing cheeks and deep breathing, but the most important sign of arousal is the erection. Because sex had to take place so quickly, a large penis facilitated a quick selection.

Over time, humans started wearing clothes and that created a nice paradox: the very fact that humans were covering up their body made the penis more prominent. For that we have a muscle to thank that has since lost its function.

Most mammals have a layer of muscle under the skin. Horses, for example, can use it to twitch their skin to get rid of flies. Primitive humans could do that too. Now we only have the remains of such a muscle in the human body, for example in the groin, where we have the fascia of Scarpa. We also still have one of these superficial muscles in the neck, a small muscle in the hand, and a muscle in the skin of the scrotum and penis: the dartos muscle.

Most people with a penis have no idea that there is a muscle around their sex organ, because you can only see it if you look at the penis skin under a microscope. Men don’t walk around displaying biceps in their penis, and the dartos muscle doesn’t let you twitch your penis, either. So what does it do?

Not a single male mammal walks around waving its penis, apart from when a male feels a great desire to mate. In most mammals, the dartos muscle neatly tucks the flaccid penis inside the body. When Homo sapiens walked around naked, their penis was also hidden from view. When you’re climbing over sharp rocks or running through thorny bushes, you want to keep your genitalia as close as possible to the body. Only with sexual arousal did the dartos muscle relax and the penis come out.

As people started to wear clothes, the purpose of this muscle diminished. Clothing took on its protective role, and men with a strong dartos muscle no longer had an evolutionary advantage from this. Natural selection did its work, but a redundant body part doesn’t disappear in 20 or even 100 generations. In 10,000 years there have been around 330 generations, but the dartos muscle is still there.

It’ll keep the penis company for a while longer, but it just does less than before. The penis and scrotum are no longer drastically drawn inside the body of modern man; at most they shrivel up a little.

An erect penis doesn’t decrease in size because of this, but the testicles are pressed closer to the body. Two penises can be exactly the same length when erect, but the man with an active dartos muscle will appear to have the smallest penis when flaccid. He might think to himself about the other man: Blimey, he’s well hung! But what he could perhaps think is: Poor thing, he’s got a bit of a lazy dartos muscle there!

Therein lies the second paradox that burdens the male member. As I mentioned earlier, compared to other animals, men have an oversized penis. Because it also hangs outside the body, it catches the eye even more. So what do men do? They compare. And then all too quickly they come to the conclusion: Oh no, mine is too small.

Funnily enough, many men–and women–don’t even know how long the average penis is.