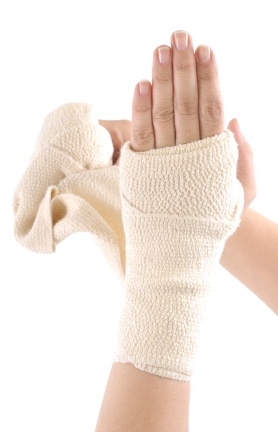 Traction wrapping is stretching the penis out and wrapping it comfortably to prevent retraction, designed for penis enlargement. Learn how traction wrapping after your penis exercises can help you achieve more penis growth, faster.

Traction wrapping is a widely accepted penis growth maintenance procedure, and it is one of the best ways to prevent “turtling,” or penis retraction, after male enhancement exercises.  A long lost member here used to have a saying that has become somewhat of a penis enlargement mantra: “Never let it turtle.” The concept is simple: keep your penis in an extended state for as long as humanly possible.

WHY TRACTION WRAP FOR PENIS ENLARGEMENT?

Think about it. We go to great “lengths” to elongate our penile tissues beyond their normal resting or tumescent states. However, our masterfully designed bodies are prone to what’s known as homeostasis. By nature, any bodily adaptations want to quickly return to their previous state. It’s really a protection for us; otherwise we would be a pretty scary looking bunch, with upturned eyelids and stretched out noses and earlobes. Unfortunately, this bodily tendency can work to our disadvantage when it comes to penis enlargement.

The idea behind traction wrapping after penis exercises is as follows: if we apply a stimulus long enough, the body will be forced to compensate. In this case, the compensation is elongated penile tissues — in other words, a bigger penis.

Traction wrapping has the following advantages:

I don’t feel that traction wrapping alone is enough for penis growth. The process does not apply sufficient force to do any significant tissue stretching. It is very useful, however, in keeping tissues elongated after an effective stretching or hanging routine.

Several materials can be effectively used as wraps. I prefer self-adhesive sports bandages. Generally the more expensive ones work better, as they usually have better adhesives that last longer. A single wrap can be used for several days and washed for hygienic reasons. After the adhesives wear off or the stretchiness is gone, simply toss the wrap and cut a new one. A roll of adhesive bandages will last several weeks.

HOW TO PERFORM PROPER TRACTION WRAPPING FOR PENIS ENLARGEMENT

As a bonus, I have found that traction wrapping is also effective for glans enlargement. After Step 4, I like to push and Kegel blood into the glans as I wrap. The wrap serves as a tourniquet to keep the glans engorged. I “pump” it full of blood until it feels like it is going to burst. It swings like a pendulum.

There you have it – traction wrapping.  I hope you find it as useful as I have!

Side to Sides & Stop and Starts: Ask The Experts

Sexercise: What is it? Benefits, exercises to try, and more